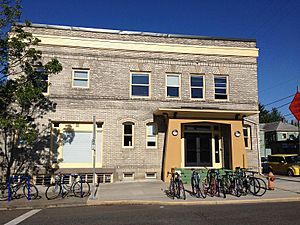 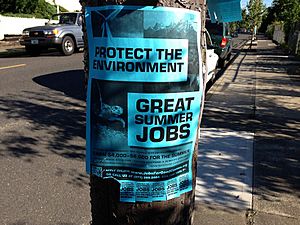 As of 2014, Environment Oregon was working on a campaign to stop the Bybee timber sale outside of Crater Lake National Park. Critical wildlife habitat surrounding Crater Lake is under threat from bulldozers, backhoes and chainsaws. Around the park, logging companies are pushing to clearcut thousands of acres of forest—land that shelters the headwaters of the Rogue and Umpqua rivers, which are critical for maintaining healthy runs of Steelhead, Coho and Chinook salmon. In response to these threats, Environment Oregon is calling on Congress to create a new fully protected wilderness area that spans over 500,000 acres of wilderness and creates a 75-mile wildlife corridor. After discussing the campaign face-to-face with over 60,000 Oregonians, in 2013, the organization delivered over 10,000 public comments to the United States Forest Service to support stopping the sale.

In 2012, Environment Oregon launched a campaign to encourage development of 250,000 solar roofs in Oregon by 2025. In July 2012, the group released a new report, "Solar Works for Oregon," which outlines the sun's vast potential to provide power, protect the environment, and create jobs for Oregonians. The report revealed that Oregon could feasibly develop enough electricity from rooftop solar in the next decade to power 250,000 typical Oregon homes—or all the homes in Portland. Oregon could also produce 30 times as much solar energy as it does today— preventing 3.8 million tons of carbon dioxide pollution, the equivalent of taking 730,000 cars off the road.

Environment Oregon has also worked to promote awareness of and measures to address Oregon's connection to the Great Pacific Garbage Patch. In 2012, they successfully helped promote legislation to ban plastic bags in Portland, Corvallis and Eugene.

In 2007 Environment Oregon campaigned for renewable energy and for Measure 49, a ballot measure regarding land use planning.

Environment Oregon works with the Fund for the Public Interest to conduct its fundraising and membership development campaigns, employing dozens of canvassers and callers who contact Oregonians door-to-door, on street corners and over the phone. Facing criticism for its recruitment and employment practices, in 2009 the fund was a defendant in a lawsuit brought by current and former canvassers.

All content from Kiddle encyclopedia articles (including the article images and facts) can be freely used under Attribution-ShareAlike license, unless stated otherwise. Cite this article:
Environment Oregon Facts for Kids. Kiddle Encyclopedia.