Eohippus is small fossil proto-horse. It is an extinct genus of small equid ungulates. The only species is E. angustidens, which was long considered a species of Hyracotherium. Its remains have been found in North America and date to the early Eocene (48–56 million years ago).

Much of the evolution of the horse took place in North America. That is where horses originated, but became extinct there about 10,000 years ago. 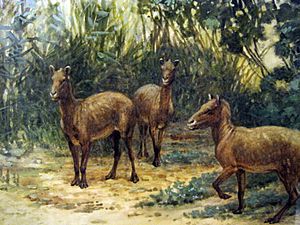 All content from Kiddle encyclopedia articles (including the article images and facts) can be freely used under Attribution-ShareAlike license, unless stated otherwise. Cite this article:
Eohippus Facts for Kids. Kiddle Encyclopedia.