Epik High is a South Korean hip hop music group. They are well known for having combined genres and different styles of hip-hop throughout their career and for the quality of their music and the lyrics to their songs. Group members are Tablo, DJ Tukutz and Mithra Jin. They made their first recording in 2003, and started their own music label, Map the Soul, in 2009. They went on a World Tour to Japan, Korea and U.S.A. (April 26 ,2009 ~ May 23, 2009). The label was acquired by Woolim Entertainment, their former label. But soon the contract between them and their company ended and they are now the members of YG Entertainment. 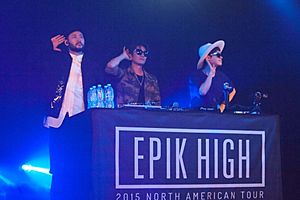 All content from Kiddle encyclopedia articles (including the article images and facts) can be freely used under Attribution-ShareAlike license, unless stated otherwise. Cite this article:
Epik High Facts for Kids. Kiddle Encyclopedia.