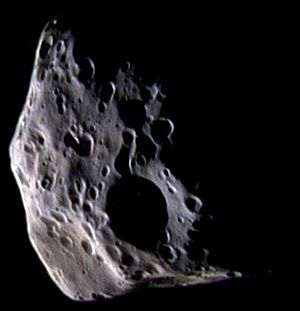 Epimetheus is a moon of Saturn. It was discovered by Richard Walker in 1966. At first, Epimetheus was thought to be same as Janus, another moon that orbits at the same distance from Saturn. It was confirmed by Voyager 1 in 1980 that they were two separate moons.

All content from Kiddle encyclopedia articles (including the article images and facts) can be freely used under Attribution-ShareAlike license, unless stated otherwise. Cite this article:
Epimetheus (moon) Facts for Kids. Kiddle Encyclopedia.