Eremophila jucunda is a flowering plant in the figwort family, Scrophulariaceae and is endemic to Western Australia. It is a small to medium-sized shrub with hairy branches and leaves, lance-shaped to egg-shaped leaves and cream-coloured, lilac or purple flowers.

The flowers are borne singly in leaf axils on a stalk 3–9 mm (0.1–0.4 in) long covered in hairs similar to those on the leaves. There are 5 pale yellowish-green to purplish-brown, linear to lance-shaped sepals which are mostly 9.5–17 mm (0.4–0.7 in) long but which enlarge after flowering. The sepals are covered with hairs similar to those on the young leaves. The petals are 17.5–28.5 mm (0.7–1 in) long and are joined at their lower end to form a tube. The petal tube may be white, cream-coloured, violet or purple on the outside and white, sometimes with purple spots inside. The outer surface of the petal tube and its lobes are mostly glabrous but the inside of the tube is filled with long hairs. The 4 stamens are fully enclosed in the petal tube. Flowering occurs from July to September and is followed by oval-shaped to conical fruits with a pointed end and which are 5–8.5 mm (0.2–0.3 in) long. 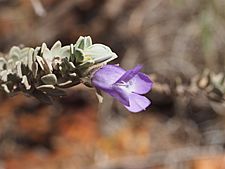 The species was first formally described by Robert Chinnock in 2007 and the description was published in Eremophila and Allied Genera: A Monograph of the Plant Family Myoporaceae. The specific epithet (jucunda) is a Latin word meaning "pleasant", "agreeable" or "delightful".

Both subspecies of E. jucunda are classified as "not threatened" by the Western Australian Government Department of Parks and Wildlife.

This eremophila grows best in warm inland areas - in southern Australia it tends to be prone to fungal disease. It can be propagated most easily by grafting onto Myoporum rootstock and grown in well-drained soils in full sun. It needs only occasional watering during a long drought but is sensitive to frost which can damaged the stems.

All content from Kiddle encyclopedia articles (including the article images and facts) can be freely used under Attribution-ShareAlike license, unless stated otherwise. Cite this article:
Eremophila jucunda Facts for Kids. Kiddle Encyclopedia.