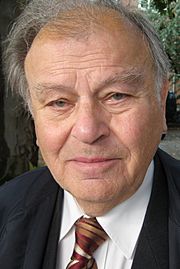 Erich Loest (24 February 1926 – 12 September 2013) was a German writer. He also wrote under the pseudonyms Hans Walldorf, Bernd Diksen, and Waldemar Naß. From 1965 to 1975, he wrote eleven novels and 30 short stories, some under pseudonyms. In 1979 he was ostracized from East Germany and did not return until after the fall of the Berlin Wall in 1990.

Loest was born on 24 February 1926 in Mittweida, Saxony. In his later years, Loest became seriously ill and announced at an Academy of Arts ceremony in 2010 that he did not have the strength to write another novel.

All content from Kiddle encyclopedia articles (including the article images and facts) can be freely used under Attribution-ShareAlike license, unless stated otherwise. Cite this article:
Erich Loest Facts for Kids. Kiddle Encyclopedia.