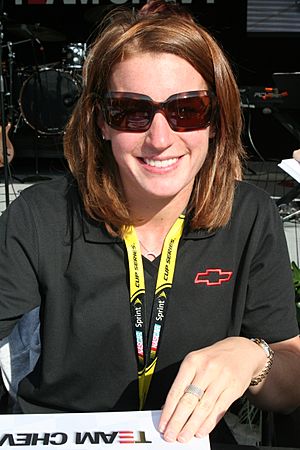 Crocker at Daytona International Speedway in 2008

Erin Crocker (born March 23, 1981) is a former race car driver. She first raced in the World of Outlaws, and won five races, earning her the National Sprint Car Hall of Fame Outstanding Newcomer Award. In 2004, Crocker became a driver for Ford Motor Company's driver development program. In 2005, she joined Evernham Motorsports, and raced in the ARCA/REMAX Series, before joining NASCAR. At Dover International Speedway, Crocker cracked a rib, and had to sit out some races. In 2006, Crocker drove full time in the NASCAR Craftsman Truck Series. One year later, Crocker became involved in a group of lawsuits between Ray Evernham and Jeremy Mayfield, who blamed the team's trouble on Evernham's relationship with a female driver. Crocker later told ESPN that her relationship with Evernham has hurt her racing career. Crocker and Evernham later married. In 2007, Crocker left Evernham Motorsports, and raced in two races for Morgan-Dollar Motorsports, before being replaced by A. J. Allmendinger and Scott Speed. She later became a broadcaster for SPEED.

All content from Kiddle encyclopedia articles (including the article images and facts) can be freely used under Attribution-ShareAlike license, unless stated otherwise. Cite this article:
Erin Crocker Facts for Kids. Kiddle Encyclopedia.