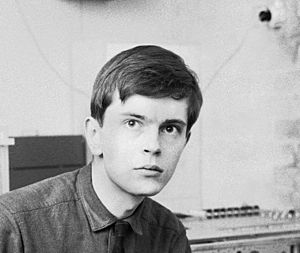 Erkki Juhani Kurenniemi (July 10, 1941 – May 1, 2017) was a Finnish designer, philosopher and artist. He was best known for his electronic music works and the electronic instruments he has designed. He is called as one of the leading early pioneers of electronic music in Finland. Kurenniemi was also a science adviser, a futurologist, a pioneer of media culture, and an experimental film-maker. He was born in Hämeenlinna, Finland.

All content from Kiddle encyclopedia articles (including the article images and facts) can be freely used under Attribution-ShareAlike license, unless stated otherwise. Cite this article:
Erkki Kurenniemi Facts for Kids. Kiddle Encyclopedia.