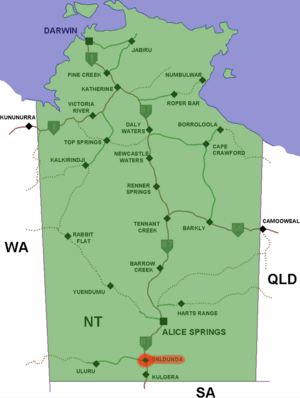 Erldunda is a homestead at the road junction of the Stuart Highway and Lasseter Highways, 200 kilometres (124 mi) south-west of Alice Springs in the Northern Territory, Australia.

Erldunda Station is a pastoral lease that operates as a cattle station. It occupies an area of 1,200 square miles (3,108 km2) that carried a herd of 6,500 head of Santa Gertrudis cattle in 2010.

The property was established in the 1870s by Richard Warburton who stocked it in 1884, the property remained with the Warburton family until the 1920s.

The station shares boundaries with other pastoral leases such as Lyndavale to the west, Mount Ebenezer and Palmer Valley to the north, Idracowra to the east and Umbeara and Victory Downs to the south. The ephemeral watercourses Karinga Creek and Kalamurta Creek both flow through the property.

All content from Kiddle encyclopedia articles (including the article images and facts) can be freely used under Attribution-ShareAlike license, unless stated otherwise. Cite this article:
Erldunda Facts for Kids. Kiddle Encyclopedia.