Erwin Raphael McManus (born August 28, 1958) is an author, futurist, filmmaker, and fashion designer. He is the lead pastor of Mosaic, a megachurch based in Los Angeles. Erwin is a speaker on issues related to postmodernism and postmodern Christianity, and also writes and lectures on culture, identity, change, and other topics.

Born Irving Rafael Mesa-Cardona, in San Salvador, El Salvador, McManus was raised by his grandparents for the first years of his life. McManus, along with his brother Alex, immigrated to the United States when he was young, joining his mother. He grew up on the east coast - primarily in Miami, Florida, but also in Queens, NY and Raleigh, NC.

The name McManus comes from his mother's second marriage. McManus was not a legal name, but his stepfather's alias and later was legalized by McManus in adulthood.

McManus studied philosophy at Elon University and later earned his B.A. in psychology from the University of North Carolina at Chapel Hill and his M.Div. from Southwestern Baptist Theological Seminary in Fort Worth, Texas. He also received a Doctorate in Humane Letters, an honorary degree, from Southeastern University in Lakeland, Florida.

He and his wife Kim have three children.

While working on his master's degree in Dallas/Fort Worth, McManus began two congregations while serving among the urban poor.

He became the Metropolitan Consultant and City Strategist for the city of Dallas and served in that role as a Futurist and Urbanologist from 1990 to 1993.

He moved with his family to Los Angeles in 1993 and became senior pastor of The Church on Brady in East Los Angeles. He later changed the name to Mosaic. Since the 1990s, McManus has been associated with the Leadership Network. In addition, he partners with Bethel Seminary as a lecturer and futurist.

McManus has used psychological personality metrics in his church, such as the Myers-Briggs type indicator and Gallup's Strengths Finder. He is currently an advisor with the Awaken Group, a transformation design company. 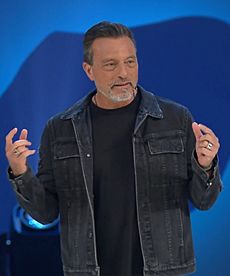 Since 2004, McManus has worked as a filmmaker in multiple roles. McManus started and owned companies in both the fashion industry and film industry.

In 2013 McManus Studios and McManus shut down after investors pulled funding from the failing business. McManus took out loans to pay employees and finish contracted projects.

All content from Kiddle encyclopedia articles (including the article images and facts) can be freely used under Attribution-ShareAlike license, unless stated otherwise. Cite this article:
Erwin McManus Facts for Kids. Kiddle Encyclopedia.