Jhoan Esteban Chaves Rubio (born 17 January 1990) is a Colombian professional road bicycle racer, who currently rides for UCI WorldTeam Team BikeExchange. Born in Bogotá, Chaves has competed as a professional since the start of the 2012 season, having signed for the {{{team name-2012}}} team as a neo-pro, after three seasons as an amateur with the Colombia es Pasión–Coldeportes team. Chaves is a two-time grand tour podium finisher, and a monument winner. 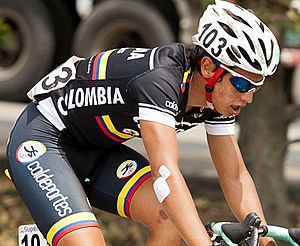 As an amateur, Chaves was the winner of the French Tour de l'Avenir race in 2011, a race previously won by five future winners of the Tour de France. Chaves had been part of the breakaway on the first road stage of the race, taking the mountains jersey after the stage. He surrendered that lead to Garikoitz Bravo the next day, but reclaimed the lead on the third stage, having led the field over the Grand Ballon. Bravo took the lead again after the fourth stage until the end of the race, but Chaves moved into contention for the overall honours with several top-ten stage finishes, and trailed race leader David Boily by seven seconds before the final stage, in Alba, Italy. Chaves was part of a four-rider breakaway that moved clear of the field after the penultimate climb, and although he was beaten to the line by Warren Barguil and Mattia Cattaneo, Chaves' third place coupled with a 24-second time gap to the field, allowed him to win the race by 17 seconds.

Chaves turned professional with the newly formed {{{team name-2012}}} team for the 2012 season, as his former team Colombia es Pasión–Café de Colombia returned to the domestic ranks in Colombia. He competed in several of the early-season Italian races, including Tirreno–Adriatico, but withdrew from the race on the penultimate day. After finishing 18th in his home race, the Vuelta a Colombia, Chaves returned to Europe for the Prueba Villafranca de Ordizia single-day race in the Basque Country. Chaves made an attack with 10 km (6.2 mi) remaining but {{{team name-2012}}}'s Gorka Izagirre shadowed his move, with Izagirre eventually beating Chaves in the sprint finish. Chaves continued his form into the Vuelta a Burgos, where he won the final stage of the race. {{{team name-2012}}} team-mates Rigoberto Urán and Sergio Henao animated the field on the final climb to Lagunas de Neila, and only Chaves was able to follow the pair; Chaves ultimately beat his former team-mate to take his first professional victory on the line, and allowed him to finish the race in third place overall. The following weekend, Chaves took victory in the Gran Premio Città di Camaiore in Italy, from a five-rider group, after forming the group with Italian national champion Franco Pellizotti of the {{{team name-2012}}} team, on the Monte Pitoro climb.

Chaves suffered severe injuries in a crash at the Trofeo Laigueglia in February 2013. The team doctor revealed that he had a compound fracture to his right clavicle, fractures in his left petrous bone, right cheekbone, maxillary sinuses and sphenoid bone, and also received pulmonary compressions, abrasions and suspected rib fractures.

Chaves moved to the Orica–GreenEDGE team for the 2014 season, on an initial two-year contract. 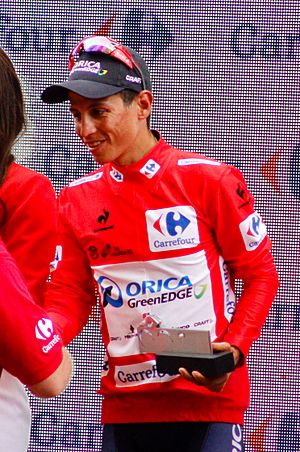 Chaves wearing the red jersey of general classification leader, at the 2015 Vuelta a España

At the Vuelta a España, Chaves won stage 2 by outsprinting Tom Dumoulin (Team Giant–Alpecin) and Nicolas Roche ({{{team name-2015}}}) at the summit of the final third category climb of Caminito del Rey. By doing so he took the overall race lead. Chaves lost the race lead on stage 5, as he was caught out in a split in the peloton at the finish and dropped 6 seconds to Dumoulin. However, on stage 6 Chaves attacked 2 kilometres (1.2 miles) from the summit of the final climb to Sierra de Cazorla and held off Dan Martin (Cannondale–Garmin) and Dumoulin by five seconds for his second stage win and retake the race lead. During the Vuelta Chaves extended his contract for a further three years. He eventually finished the Vuelta in fifth place overall.

2016 was a strong season for him as he finished second in the Giro d'Italia and third in the Vuelta a España. On 1 October, Chaves won Il Lombardia, his first victory in one of cycling's "monuments". Becoming the first ever Colombian cyclist to win a monument. His compatriot Rigoberto Uran finished in third.

In June 2017, he was named in the startlist for the 2017 Tour de France. He struggled at the event, eventually finishing 62nd in the general classification, almost two-and-a-half hours down on winner Chris Froome. He returned to the Vuelta a España later in the year. He showed good form in the opening stages, but later slipped back to finish eleventh overall.

Chaves started his 2018 campaign at the Cadel Evans Great Ocean Road Race, before starting the Herald Sun Tour. He broke away from the peloton at the final ascent of the penultimate stage, taking the victory and the lead in the overall classification. He held on to his lead to win the event overall the next day, his second victory in a stage race. Chaves also rode the Giro d'Italia as his season highlight, winning stage 6.

All content from Kiddle encyclopedia articles (including the article images and facts) can be freely used under Attribution-ShareAlike license, unless stated otherwise. Cite this article:
Esteban Chaves Facts for Kids. Kiddle Encyclopedia.