Eucalyptus caesia, commonly known as caesia or gungurru, is a species of mallee that is endemic to the south-west of Western Australia. It has smooth reddish brown bark at first, later shedding in curling flakes, lance-shaped, sometimes curved adult leaves, club-shaped flower buds covered with a waxy, bluish white bloom, pink stamens with yellow anthers and urn-shaped fruit. 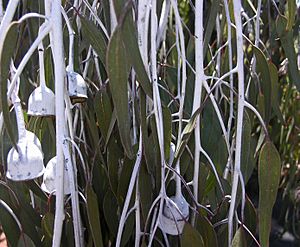 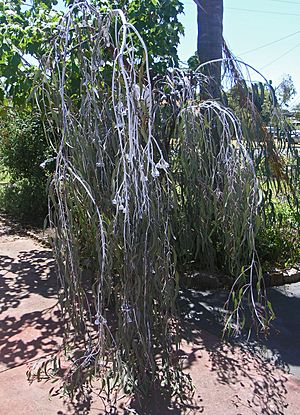 Eucalyptus caesia was first formally described in 1867 by George Bentham from a collection made by James Drummond in 1847 and the description was published in Flora Australiensis.

In 1982, Ian Brooker and Stephen Hopper described two subspecies, but the Australian Plant Census accepts these as synonyms:

The specific epithet (caesia) is a Latin word meaning "bluish grey" referring to the waxy cover of the small branches, flower buds and fruit.

Caesia grows in crevices at the base of granite outcrops in scattered inland areas of the south-west, including in the Avon Wheatbelt and Mallee biogeographic regions. The species is known to be drought tolerant.

Despite persisting as very small populations, this species does not seem to exhibit effects of inbreeding depression. Associated species include Eucalyptus crucis, Eucalyptus loxophleba, Allocasuarina huegeliana and Acacia lasiocalyx.

A form known as 'Silver Princess' is described as a "graceful weeping tree" that has an irregular and weeping form.

Propagation is from seed, which germinates readily.

All content from Kiddle encyclopedia articles (including the article images and facts) can be freely used under Attribution-ShareAlike license, unless stated otherwise. Cite this article:
Eucalyptus caesia Facts for Kids. Kiddle Encyclopedia.