Eucalyptus cameronii, commonly known as the diehard stringybark is a flowering plant that is endemic to eastern Australia. It is a small to medium-sized tree with rough, stringy bark from the trunk to the small branches, lance-shaped to curved adult leaves, flowers buds in groups of between nine and fifteen, white flowers and cup-shaped, hemispherical or more or less spherical fruit. It mainly grows on the eastern side of the Northern Tablelands in New South Wales. 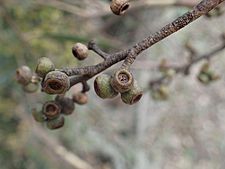 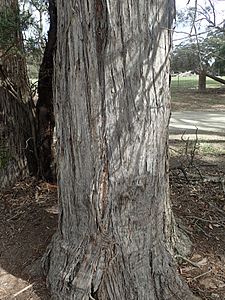 This eucalypt is similar to E. globoidea but has smaller buds and fruit, and the fruit has a narrower disc. It is also similar to E. caliginosa which has the valves of the fruit extended beyond the rim.

Eucalyptus cameronii was first formally described in 1934 by the William Blakely and Ernest McKie in Blakely's book A Key to the Eucalypts. The type specimen was collected in the Diehard State Forest near Glen Innes. The specific epithet (cameronii) honours Archibald Peter Cameron, one of the collectors of the type specimen.

Diehard stringybark grows in forest on the ranges and escarpments on the eastern side of the Northern Tablelands from just north of the Queensland border as far south as the Cottan-Bimbang National Park. It mostly grows on poor, shallow soils.

All content from Kiddle encyclopedia articles (including the article images and facts) can be freely used under Attribution-ShareAlike license, unless stated otherwise. Cite this article:
Eucalyptus cameronii Facts for Kids. Kiddle Encyclopedia.