Eucalyptus camfieldii, commonly known as Camfield's stringybark or heart-leaved stringybark, is a species of mallee or small tree that is endemic to New South Wales. It has rough, fibrous and stringy bark, broadly lance-shaped adult leaves, flower buds in groups of about eleven, white flowers and flattened hemispherical fruit. It grows in poor, sandy soil in the Sydney region. 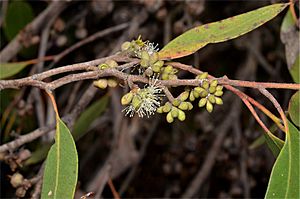 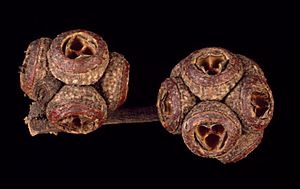 Eucalyptus camfieldii was first formally described in 1920 by Joseph Maiden and the description was published in Journal and Proceedings of the Royal Society of New South Wales from a specimen collected near Middle Harbour. The specific epithet ( camfieldii) honours Julius Henry Camfield (1852–1916) who worked in the Royal Botanic Garden, Sydney from 1882 until 1916.

Camfield's stringybark is restricted to poor, shallow sandy soil on ridges and some headlands between the Norah Head and Waterfall in New South Wales.

All content from Kiddle encyclopedia articles (including the article images and facts) can be freely used under Attribution-ShareAlike license, unless stated otherwise. Cite this article:
Eucalyptus camfieldii Facts for Kids. Kiddle Encyclopedia.