Eucalyptus crucis is a species of mallee that is endemic to Western Australia. There are three subspecies, commonly known as silver mallee or Southern Cross mallee, (subspecies crucis), narrow-leaved silver mallee, (subsp. lanceolata) and Paynes Find mallee, (subsp. praecipua). It has rough bark that is shed in curling flakes, more or less round, glaucous juvenile leaves, egg-shaped intermediate leaves and lance-shaped adult leaves. The type of bark and the proportion of juvenile, intermediate and adult leaves in the crown of mature plants varies with subspecies. The flower buds are arranged in groups of seven in leaf axils, the flowers are whitish to pale yellow and the fruit is a conical to hemispherical capsule. 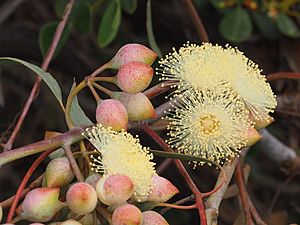 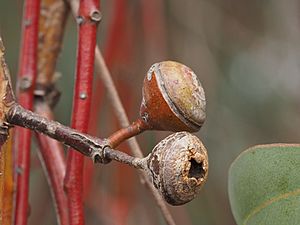 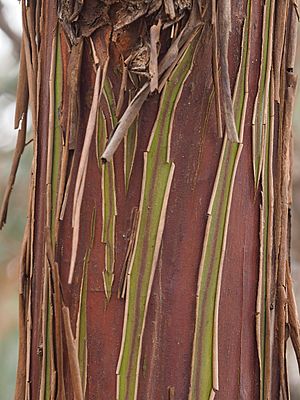 Eucalyptus crucis was first formally described in 1923 by Joseph Maiden from a specimen collected near Southern Cross by Henry Steedman in 1922. Maiden published the description in his book A Critical Revision of the Genus Eucalyptus. The specific epithet (crucis) is a Latin word meaning "cross", referring to the type location.

In 1982, Ian Brooker and Stephen Hopper described two subspecies, crucis and lanceolata, and in 1993 they described subspecies praecipua. The three subspecies have been accepted by the Australian Plant Census.

Silver mallee is found in an area in the Goldfields-Esperance and Wheatbelt region of Western Australia where it grows in sandy, clay or loam soils amongst granite outcrops. It is associated with sheoak (Allocasuarina species), wattle (Acacia species) and one-sided bottlebrush (Calothamnus species).

Subspecies crucis is only found between Merredin, Southern Cross and Westonia, subspecies lanceolata between Corrigin, Mount Churchman and Chiddarcooping Rock. Subspecies praecipua is only known from near Paynes Find.

Subspecies lanceolata is classified as "not threatened" but subspecies crucis and praecipua are classified as "Threatened Flora (Declared Rare Flora — Extant)" by the Department of Environment and Conservation (Western Australia). Subspecies crucis (silver mallee) is also listed as "vulnerable" under the Australian Government Environment Protection and Biodiversity Conservation Act 1999. The main threats to this subspecies are recreational activities, pipeline maintenance, grazing and weed invasion.

This eucalypt is frost and drought tolerant and is suitable for alkaline soils. It is commonly used as a windbreak, a street tree, for its decorative fruit, for erosion control, and as a honey producing or bird nesting plant.

All content from Kiddle encyclopedia articles (including the article images and facts) can be freely used under Attribution-ShareAlike license, unless stated otherwise. Cite this article:
Eucalyptus crucis Facts for Kids. Kiddle Encyclopedia.