Calothamnus is a genus of shrubs in the family Myrtaceae and is endemic to the south-west of Western Australia. The common names one-sided bottlebrush or claw flower are given to some species due to their having the flowers clustered on one side of the stem or because of the claw-like appearance of their flowers. Calothamnus species are generally medium to tall woody shrubs with crowded leaves. In most species the leaves are crowded and linear in shape, and the flowers are usually arranged in dense clusters. The petals are small and fall off the flower soon after it opens but the stamens are long, numerous and usually bright red.

Plants in the genus Calothamnus are medium to tall shrubs, sometimes low-growing ground covers. The leaves are linear or narrow lance-shaped with the narrower end towards the base, usually glabrous and have distinct oil glands. The flowers are in small groups or dense spikes on leafless, older stems or between the leaves on younger ones. The sepals are fused to form a bell-shaped cup which is often immersed in the branch and there are four or five petals which usually fall off after the flower has opened. There are many stamens, joined for a large proportion of their length into four or five "claws". In some species the upper two claws are fused together and the lower ones are shorter. The stamens are brightly coloured, crimson to a deep purple or rarely yellow. The fruit is a woody capsule. 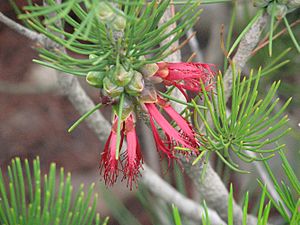 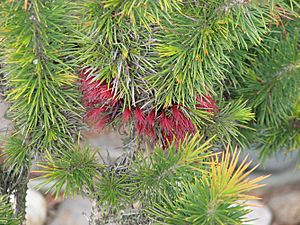 The first species in the genus to be described was Calothamnus sanguineus. It was first formally described in 1806 by the French biologist Jacques Labillardière in Novae Hollandiae Plantarum Specimen, Volume 2. The name Calothamnus is derived from the Greek words kalos meaning "beautiful" and thamnos meaning "a shrub" or "a bush".

Most species of Calothamnus have been grown in gardens but need full sun and good drainage. Propagation is usually from seeds which are retained in the hard fruits throughout the life of the plant but cuttings can be used to retain the colour of yellow forms.

The following is a list of species recognised by the Western Australian Herbarium:

All content from Kiddle encyclopedia articles (including the article images and facts) can be freely used under Attribution-ShareAlike license, unless stated otherwise. Cite this article:
Calothamnus Facts for Kids. Kiddle Encyclopedia.