Eucalyptus extensa is a species of mallet that is endemic to Western Australia. It has smooth bark, lance-shaped adult leaves, flower buds in groups of seven, yellowish green flowers and hemispherical fruit with the valves extended well beyond the level of the rim. 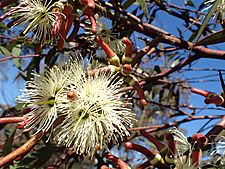 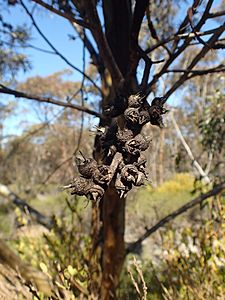 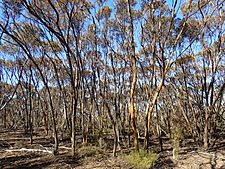 Eucalyptus extensa was first formally described in 1991 by the botanists Lawrence Alexander Sidney Johnson and Ken Hill in the journal Telopea, from a specimen collected near the road between Hyden and Norseman. The specific epithet is taken from the Latin word extensus meaning "stretched out or extended" in reference to the long opercula on the buds.

This mallet occurs on sandplains and undulating areas along the south of Western Australia in the southern Wheatbelt and south western Goldfields-Esperance regions where it grows in red loam, grey sandy loam and sometimes gravelly soils.

All content from Kiddle encyclopedia articles (including the article images and facts) can be freely used under Attribution-ShareAlike license, unless stated otherwise. Cite this article:
Eucalyptus extensa Facts for Kids. Kiddle Encyclopedia.