Eucalyptus globulus subsp. bicostata, commonly known as the southern blue gum, eurabbie, blue gum or Victorian blue gum, is a subspecies of tree that is endemic to south-eastern Australia. It has mostly smooth bark with some persistent slabs of old bark at the base, juvenile leaves with one glaucous side, glossy, lance-shaped adult leaves, warty flower buds in groups of three, white flowers and hemispherical to conical fruit. 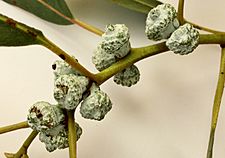 Eucalyptus globulus subsp. bicostata is a tree that typically grows to a height of 45 m (148 ft) and forms a lignotuber. The bark is mostly smooth, shedding in long strips to leave a white or greyish surface. There is sometimes rough, partially shed bark at the base of the trunk and ribbons of shedding bark in the upper branches. Young plants and coppice regrowth have stems that are more or less square in cross-section, with a prominent wing on each corner. The juvenile leaves are sessile, arranged in opposite pairs, elliptic to egg-shaped, the lower surface covered by a white, waxy bloom, 40–115 mm (1.6–4.5 in) long and 22–60 mm (0.87–2.36 in) wide. Adult leaves are arranged alternately, glossy green, lance-shaped to curved, 140–400 mm (5.5–15.7 in) long and 20–60 mm (0.79–2.36 in) wide on a petiole 30–60 mm (1.2–2.4 in) long.

Southern blue gum was first formally described by Joseph Henry Simmonds in the book Trees from other lands for shelter and timber in New Zealand: Eucalypts and given the name Eucalyptus bicostata. In 1974, James Barrie Kirkpatrick reduced E. bicostata to the subspecies, E. globulus subsp. bicostata. The change has been accepted by the Australian Plant Census. The epithet bicostata is derived from the Latin bicostatus, "two-ribbed", referring to the buds and fruit.

All content from Kiddle encyclopedia articles (including the article images and facts) can be freely used under Attribution-ShareAlike license, unless stated otherwise. Cite this article:
Eucalyptus globulus subsp. bicostata Facts for Kids. Kiddle Encyclopedia.