Kids Encyclopedia Facts
Not to be confused with Sydney blue gum.
For a broader coverage related to this topic, see Blue gum.

Eucalyptus globulus, commonly known as southern blue gum, is a species of tall, evergreen tree endemic to southeastern Australia. It has mostly smooth bark, juvenile leaves that are whitish and waxy on the lower surface, glossy green, lance-shaped adult leaves, glaucous, ribbed flower buds arranged singly or in groups of three or seven in leaf axils, white flowers and woody fruit. There are four subspecies, each with a different distribution, occurring in New South Wales, Victoria and Tasmania. 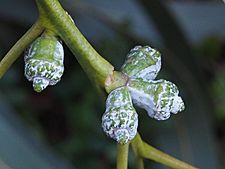 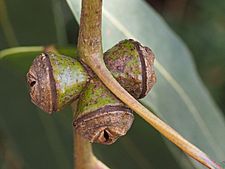 Eucalyptus globulus is a tree that typically grows to a height of 45 m (148 ft) but may sometimes only be a stunted shrub, or alternatively under ideal conditions can grow as tall as 90–100 m (300–330 ft), and forms a lignotuber. The bark is usually smooth, white to cream-coloured but there are sometimes slabs of persistent, unshed bark at the base. Young plants, often several metres tall, and coppice regrowth have stems that are more or less square in cross-section with a prominent wing on each corner. Juvenile leaves are mostly arranged in opposite pairs, sessile, glaucous elliptic to egg-shaped, up to 150 mm (5.9 in) long and 105 mm (4.1 in) wide. Adult leaves are arranged alternately, the same glossy to dark green on both sides, lance-shaped or curved, 150–300 mm (5.9–11.8 in) long and 17–30 mm (0.67–1.18 in) wide on a petiole 1.5–6 mm (0.059–0.236 in) long. The flower buds are arranged singly or in groups of three or seven in leaf axils, sometimes sessile or on a short thick peduncle. The individual buds are also usually sessile, sometimes on a pedicel up to 5 mm (0.20 in) long. Mature buds are top-shaped to conical, glaucous or green, with a flattened hemispherical, warty operculum with a central knob. Flowering time varies with subspecies and distribution but the flowers are always white. The fruit is a woody conical or hemispherical capsule with the valves close to rim level.

The d'Entrecasteaux expedition made immediate use of the species when they discovered it, the timber being used to improve their oared boats. The Tasmanian blue gum was proclaimed as the floral emblem of Tasmania on 27 November 1962. The species name is from the Latin globulus, a little ball or small sphere, referring to the shape of the fruit.

In 1974, James Barrie Kirkpatrick described four subspecies and the names have been accepted by the Australian Plant Census. Each subspecies has a characteristic arrangement of its flower buds:

They typically grow from 30–55 m (98–180 ft) tall. The tallest currently known specimen in Tasmania is 90.7 m (298 ft) tall. There are historical claims of even taller trees with Robert Edwards Carter Stearns claiming that when he was alive, they were capable of growing to 400 feet. While this claim is often regarded as being exaggerated, the environmentalist Jared Diamond argues in favor of this claim, stating that such trees were likely cut down during the colonization of Australia by the English. Tasmanian D. W. Lewin claimed that the tallest was 101 m (331 ft). 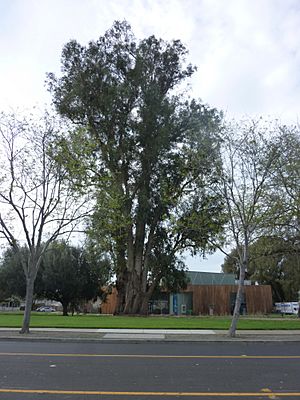 Blue gum is one of the most extensively planted eucalypts. Its rapid growth and adaptability to a range of conditions is responsible for its popularity. It is especially well-suited to countries with a Mediterranean-type climate, but also grows well in high altitudes in the tropics.

In about 1860 Francis Cook planted the tree on Monserrate Palace, his property at Sintra in Portugal and within twenty years it had attained the height of 100 m and a circumference of 5 m. By 1878 the tree ″had spread from one end of Portugal to the other″. In 1878 the tree was also planted, partly on Cook's recommendation, in Galway, Ireland to reclaim ″useless bog land″.

E. globulus begun to be planted as plantations in Los Lagos and Los Ríos regions of Chile in the 1990s. However at these latitudes around the 40th parallel south the tree is at the southern border of the climatic conditions where it can grow, hence good growth in this part of southern Chile requires good site selection such as sunny north-facing slopes. Some of these plantations grow on red clay soil.

Blue gum timber is yellow-brown, fairly heavy, with an interlocked grain, and is difficult to season. It has poor lumber qualities due to growth stress problems, but can be used in construction, fence posts and poles.

The leaves are steam distilled to extract eucalyptus oil. E. globulus is the primary source of global eucalyptus oil production, with China being the largest commercial producer. The oil has therapeutic, perfumery, flavoring, antimicrobial and biopesticide properties. Oil yield ranges from 1.0-2.4% (fresh weight), with cineole being the major isolate. E. globulus oil has established itself internationally because it is virtually phellandrene free, a necessary characteristic for internal pharmaceutical use. In 1870, Cloez identified and ascribed the name "eucalyptol" — now more often called cineole — to the dominant portion of E. globulus oil.

Tasmanian blue gum leaves are used as a herbal tea.

Blue gum flowers are considered a good source of nectar and pollen for bees.

It was introduced to California in the mid-19th century, partly in response to the Southern Pacific Railroad's need for timber to make railroad ties, and is prominent in many parks in San Francisco and throughout the state. Naturalists, ecologists, and the United States National Park Service consider it an invasive species due to its ability to quickly spread via seeds and displace native plant communities, while local authorities, especially many fire departments across California consider it to be a major fire hazard, although the United States Department of Agriculture does not list it among its "Invasive and Noxious plants" list in California. Due to these factors, programs across the state of California have been established to remove eucalyptus growth, and restore native biomes in certain park areas, such as on Angel Island in San Francisco Bay, and in the hills of Oakland, California.

All content from Kiddle encyclopedia articles (including the article images and facts) can be freely used under Attribution-ShareAlike license, unless stated otherwise. Cite this article:
Eucalyptus globulus Facts for Kids. Kiddle Encyclopedia.