Moss Vale is a town in the Southern Highlands of New South Wales, Australia, in the Wingecarribee Shire. It has a population of 7,792 and is sited on the Illawarra Highway, which connects to Wollongong and the Illawarra coast via Macquarie Pass. The town is colloquially known as Mossy (Mozzy), and also Moss Vegas.

Moss Vale has several heritage buildings. In the centre of the main street is Leighton Gardens.

Moss Vale is believed to have fertile soil and good precipitation. Agricultural rural holdings in the area specialise in dairy herds, mainly Holstein Frisian, and there are an assortment of beef studs and sheep properties. The town has a commercial district and a golf course. 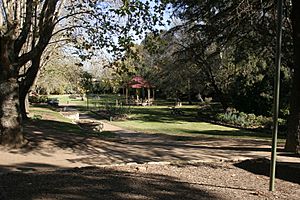 The Moss Vale area was once occupied by the Gundangara people, though they had disappeared by the 1870s, partly due to the loss of their hunting land to European settlers. Governor Hunter sent a party led by ex-convict John Wilson to investigate the area in 1798. Various others explored the area up to 1815, including John Warby, George Caley, Hamilton Hume and John Oxley. Hume, Charles Throsby and Joseph Wild explored the area west of Sutton Forest in 1817 and in 1818, together with James Meehan, they explored the area between Moss Vale and Jervis Bay. Governor Macquarie granted Throsby 1,000 acres (4.0 km2), known as Throsby Park, at Bong Bong, on the northeastern outskirts of Moss Vale and put him in charge of building the Old Argyle Road from Sydney to Goulburn in 1819. This road was replaced in the 1830s by a more direct road via Berrima surveyed by Thomas Mitchell and most of the population of Bong Bong moved to Berrima. The heritage-listed property of Throsby Park house was built about 1834, six years after Throsby's suicide.

The area, which was considered to be part of Sutton Forest, remained rural until the coming of the railway. Subdivision part of Throsby Park for the town of Moss Vale, named after Jemmy Moss, a herdsman at Throsby Park, commenced in 1864, in anticipation of the opening of Sutton Forest railway station in 1867 at the intersection with Old Argyle Road. Governor Belmore rented Throsby Park from 1870 to 1872 to what is commonly believed to escape the summer heat of Sydney. The railway and the Robertson Land Acts encouraged denser settlement by selectors in the Southern Highlands and led to the growth of Moss Vale as a town. In 1877 Sutton Forest railway station was renamed Moss Vale.

Moss Vale station is the primary southern terminus of the Southern Highlands railway line. The line provides regular services from Moss Vale to southern Sydney, where a change of trains is generally required to access the city centre. Limited services continue south of Moss Vale to Goulburn. The station is also several long distance services a day. Moss Vale is the junction of the Unanderra - Moss Vale railway line to Wollongong, opened in 1932, but now only used by freight trains.

All content from Kiddle encyclopedia articles (including the article images and facts) can be freely used under Attribution-ShareAlike license, unless stated otherwise. Cite this article:
Moss Vale, New South Wales Facts for Kids. Kiddle Encyclopedia.