Eucalyptus globulus subsp. maidenii, commonly known as Maiden's gum, is a subspecies of tree that is endemic to southeastern Australia. It has mostly smooth bark with some persistent slabs of old bark at the base, juvenile leaves with one glaucous side, lance-shaped adult leaves, flower buds arranged in groups of seven, white flowers and conical, pedicellate, sometimes glaucous fruit that is more or less square in cross-section 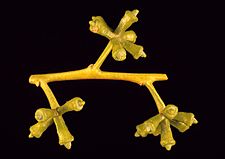 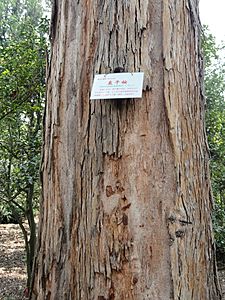 Maiden's gum was first formally described in 1890 by Ferdinand von Mueller who gave it the name Eucalyptus maidenii and published the description in Proceedings of the Linnean Society of New South Wales from collections by William Bäuerlen. In 1974, James Barrie Kirkpatrick described four subspecies of E. globulus and changed the name E. maidenii to E. globulus subsp. maidenii. The epithet maidenii honours Joseph Maiden.

This subspecies of E. globulus grows in forest in mountain valleys, on slopes and ridges in near-coastal ranges of New South Wales south of the Shoalhaven River and in eastern Victoria near the upper reaches of the Genoa and Cann Rivers.

All content from Kiddle encyclopedia articles (including the article images and facts) can be freely used under Attribution-ShareAlike license, unless stated otherwise. Cite this article:
Eucalyptus globulus subsp. maidenii Facts for Kids. Kiddle Encyclopedia.