Eucalyptus goniantha, commonly known as Jerdacuttup mallee, is a species of mallee, or rarely a tree, that is endemic to Western Australia. It has smooth bark, lance-shaped adult leaves, flower buds in groups of between seven and eleven, creamy white flowers and more or less ribbed, hemispherical fruit. 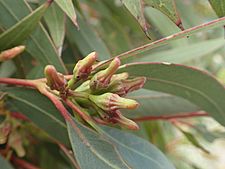 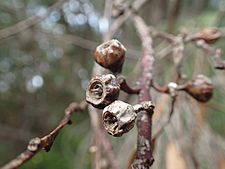 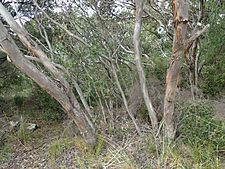 Eucalyptus goniantha was first formally described in 1847 by Nikolai Turczaninow in Bulletin de la Société Impériale des Naturalistes de Moscou. In 1976, Ian Brooker described subspecies goniantha and semiglobosa, but only subsp. goniantha has been accepted by the Australian Plant Census. In 2012, Dean Nicolle described subspecies kynoura and the name has been accepted by the Australian Plant Census. It differs mainly in having strongly ribbed fruit. The specific epithet goniantha is from the Greek gonio-, angled and anthos, flower, referring to the ribbed flower buds and fruit. The epithet kynoura is from the Greek kynouron meaning "sea-cliff", referring to the habitat of the subspecies.

Both subspecies of E. goniantha grow in exposed coastal and near-coastal places in thin sandy soil, usually over limestone. Subspecies goniantha is found between Mutton Bird Island and the Flinders Peninsula near Albany, and as far inland as Manypeaks where it intergrades with E. ecostata. Subspecies kynoura is only found at Point Hillier near Denmark.

Subspecies goniantha is classified as "not threatened" but subspecies kynoura is classified as "Priority Two" by the Western Australian Government Department of Parks and Wildlife meaning that it is poorly known and from only one or a few locations.

All content from Kiddle encyclopedia articles (including the article images and facts) can be freely used under Attribution-ShareAlike license, unless stated otherwise. Cite this article:
Eucalyptus goniantha Facts for Kids. Kiddle Encyclopedia.