Eucalyptus leptopoda, commonly known as the Tammin mallee, is a species of mallee or rarely a tree, that is endemic to Western Australia. It has smooth mottled grey or brownish bark, sometimes with rough bark near the base, linear to curved adult leaves, flower buds usually in groups of seven and eleven, creamy white flowers and hemispherical to flattened spherical fruit. 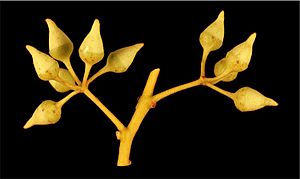 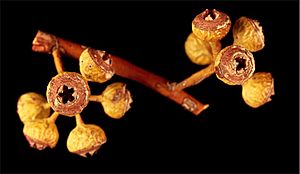 Eucalyptus leptopoda was first formally described by the botanist George Bentham in 1867 and published in Flora Australiensis. The type specimen was collected by James Drummond. The specific epithet is derived from ancient Greek words meaning "thin", "narrow" or "slender" and "foot" in reference to the slender pedicels.

In 1992, Lawrie Johnson and Ken Hill described four subspecies and the names have been accepted by the Australian Plant Census:

The Tammin mallee is endemic to the Mid West, Wheatbelt and western parts of the Goldfields-Esperance regions in Western Australia where it is commonly found on sand plains, dunes and rises growing in sandy or loamy soils sometimes containing gravel, over and around areas of laterite.

All four subspecies of E. leptopoda are classified as "not threatened" by the Western Australian Government Department of Parks and Wildlife.

All content from Kiddle encyclopedia articles (including the article images and facts) can be freely used under Attribution-ShareAlike license, unless stated otherwise. Cite this article:
Eucalyptus leptopoda Facts for Kids. Kiddle Encyclopedia.