Eucalyptus ligulata, commonly known as Lucky Bay mallee, is a mallee that is native to a few small areas along the south coast of Western Australia. It has smooth bark on the trunk and branches, narrow lance-shaped leaves, flower buds in groups of between nine and thirteen, creamy white flowers and cup-shaped or barrel-shaped fruit with shallow ribs on the sides. 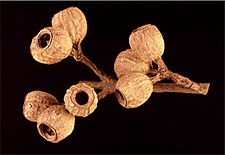 Eucalyptus ligulata was first formally described in 1974 by the botanist Ian Brooker from a specimen collected by Keith M. Allan near a beach in the Cape Le Grand National Park. The description was published in the journal Nuytsia. The specific epithet (ligulata) is a Latin word meaning "strap-shaped".

In 2002, Dean Nicolle described two subspecies and the names have been accepted by the Australian Plant Census:

Both subspecies of E. ligulata are classified as "Priority Four" by the Government of Western Australia Department of Parks and Wildlife, meaning that each is rare or near threatened.

All content from Kiddle encyclopedia articles (including the article images and facts) can be freely used under Attribution-ShareAlike license, unless stated otherwise. Cite this article:
Eucalyptus ligulata Facts for Kids. Kiddle Encyclopedia.