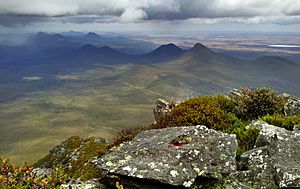 View of Range from Toolbrunup

It protects the Stirling Ranges, or Koikyennuruff, a range of mountains and hills over 65 km (40 mi) wide from west to east, stretching from the highway between Mount Barker and Cranbrook eastward past Gnowangerup. Notable features include Toolbrunup, Bluff Knoll - the tallest peak in the southwestern region, and a silhouette called The Sleeping Princess which is visible from the Porongurup Range. Popular recreational activities in the park include bushwalking, abseiling and gliding. Camping is permitted only in Moingup campsite within the park boundaries (fee applies). Other peaks which have tracks include Mt Trio, Talyuberlup Peak and Mt Magog. A premier walk known as The Stirling Ridge Walk is usually done over 2 days and includes Ellen Peak (the most Easterly peak) and Bluff Knoll.

The traditional owners are the Mineng and Koreng groups of the Noongar peoples who have inhabited the region for tens of thousands of years. The noongar know the range as Koi Kyenunu-ruff which means mist moving around the mountains. The area was important to Indigenous Australians with the surrounding lowlands providing many sources of food. The women gathered seeds, roots and fruit while men hunted kangaroos and other animals.

The first European to sight the range was Matthew Flinders in January 1802 while he was exploring of the southern coast of Australia. He named the range Mount Rugged.

Ensign Dale explored the area in 1832 and climbed Toolbrunup.

Stirling Range was named by the surveyor John Septimus Roe in 1835 after the Governor of the Swan River Colony, James Stirling, even though Stirling never actually visited the area.

Sandalwood cutters established a track through the park in about 1848. European settlers arrived in the late 1800s initially around Amelup and farmed much of the surrounding areas. John Forrest climbed Toolbrunup in 1881 with Henry Samuel Ranford and made a cairn at the summit. The boundaries of the park were first suggested by Jas Hope, the Chief Draftsperson of the Lands and Survey Department, in 1908 and approved by N.J. Moore who was the Minister of Lands at the time.

The National Park was gazetted in 1913 and the first park ranger was appointed in 1964.

The park was listed as a National Heritage place in 2006. 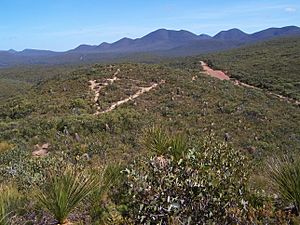 The area is of great biogeographic and evolutionary interest and displays one of the richest floras in the world.

The park provides an important refuge for a large diversity of Australia's native plants and animals. Despite the low soils fertility the area supports over 1,500 different plant species with over 87 of the species found only in the area of the park.

Five major vegetation communities are known in the park with thicket and mallee-heath at higher elevations and woodlands, wetlands and salt lake communities on the lower slopes and plains. 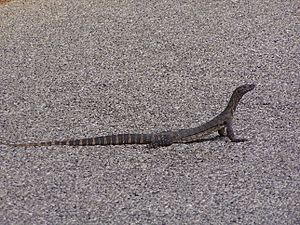 Varanus gouldii on road in park

The park has been identified by BirdLife International as an Important Bird Area (IBA) because it supports populations of endangered short-billed black cockatoos and western whipbirds, and is visited by endangered long-billed black-cockatoos.

Many native mammals are found in the park including the western pygmy possum and the western grey kangaroo.

Deeper shaded gullies support a range ancient species including land snails, trapdoor spiders and giant earthworms that date back over millions of years.

All content from Kiddle encyclopedia articles (including the article images and facts) can be freely used under Attribution-ShareAlike license, unless stated otherwise. Cite this article:
Stirling Range National Park Facts for Kids. Kiddle Encyclopedia.