Eucalyptus lucasii, commonly known as Barlee box, is a species of mallee that is endemic to central Western Australia. It has smooth bark, sometimes rough near the base, with broadly lance-shaped adult leaves, flower buds mostly in groups of between seven and eleven on a branched peduncle, creamy white flowers and cup-shaped to cylindrical or conical fruit. 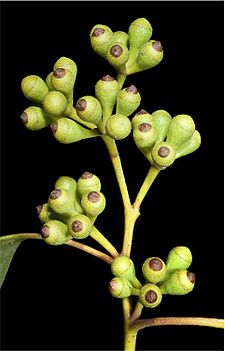 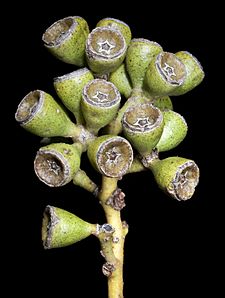 Eucalyptus lucasii was first formally described by the botanist William Blakely in 1934 in his book, A Key to the Eucalypts. The type specimen was collected by Charles Fitzgerald Fraser "per" W.C. Grasby from around Lake Barlee in 1919. The specific epithet honours Arthur Henry Shakespeare Lucas.

Eucalyptus lucasii belongs in Eucalyptus subgenus Symphyomyrtus section Adnataria (also known as the boxes). Within the Adnataria section, E. lucasii is part of a subgroup, series Buxeales which are all found in south-eastern Australia, with only four occurring in Western Australia, those being E. cuprea, E. absite, E. normantonensis and E. lucasii. All four have inflexed stamens which separates them from the eastern species.

Barlee box grows in sandy soils in shrubland in a broad area of central Western Australia. It occurs in the northern goldfields from Leonora and the western part of the Great Victoria Desert and north to the Pilbara.

All content from Kiddle encyclopedia articles (including the article images and facts) can be freely used under Attribution-ShareAlike license, unless stated otherwise. Cite this article:
Eucalyptus lucasii Facts for Kids. Kiddle Encyclopedia.