Eucalyptus melanophloia, commonly known as silver-leaved ironbark, is a species of tree that is endemic to northeastern Australia. It is a small to medium-sized tree with rough, hard ironbark on the trunk and branches. The crown is usually composed of juvenile leaves that are dull, glaucous, sessile and arranged in opposite pairs. The flower buds are arranged in groups of seven, the flowers white and the fruit cup-shaped to hemispherical. 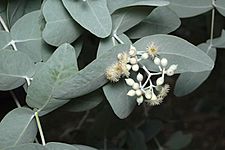 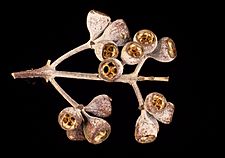 Eucalyptus melanophloia was first formally described in 1859 by Ferdinand von Mueller and the description was published in the Journal of the Proceedings of the Linnean Society, Botany. The specific epithet is derived from the ancient Greek words melas, genitive melanos (μέλας, genitive μέλανος), meaning "black" and phloios (φλοιός) meaning "bark".

The silver-leaved ironbark grows in woodland on plains and tablelands in the eastern half of Queensland south from Mareeba, on the western side of the Great Dividing Range in New South Wales north from Dubbo and in a few isolated locations in the Northern Territory.

This eucalypt is classified as "least concern" under the Queensland Government Nature Conservation Act 1992.

All content from Kiddle encyclopedia articles (including the article images and facts) can be freely used under Attribution-ShareAlike license, unless stated otherwise. Cite this article:
Eucalyptus melanophloia Facts for Kids. Kiddle Encyclopedia.