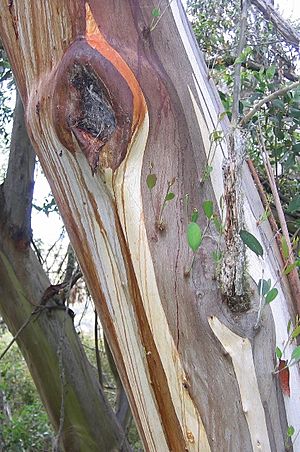 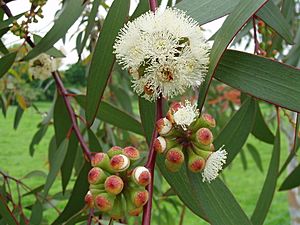 Eucalyptus pauciflora, commonly known as snow gum, cabbage gum or white sally, is a species of tree or mallee that is native to eastern Australia. It has smooth bark, lance-shaped to elliptical leaves, flower buds in clusters of between seven and fifteen, white flowers and cup-shaped, conical or hemispherical fruit. It is widespread and locally common in woodland in cold sites above 700 m (2,300 ft) altitude.

Eucalyptus pauciflora was first formally described in 1827 by Kurt Polycarp Joachim Sprengel from an unpublished description by Franz Sieber. Sprengel published the description in Systema Vegetabilium. The specific epithet pauciflora is from the Latin pauciflorus meaning "few-flowered". The term pauciflora (few-flowered) is a misnomer, and may originate in an early collected specimen losing its buds in transit.

Six subspecies are recognised by the Australian Plant Census as at 30 November 2019:

Snow gum grows in woodland along the ranges and tablelands, in flat, cold sites above 700 m (2,300 ft) from the far south-east of Queensland, through New South Wales, the Australian Capital Territory, and Victoria, to near Mount Gambier in South Australia and Tasmania.

In Tasmania the species hybridises with Eucalyptus coccifera and Eucalyptus amygdalina.

Snow gum is amongst the hardiest of all eucalyptus species, surviving the severe winter temperatures of the Australian Alps. The species regenerates from seed, by epicormic shoots below the bark, and from lignotubers. It is the most cold-tolerant species of eucalyptus, with E. pauciflora subsp. niphophila surviving temperatures down to −23 °C (−9 °F) and year-round frosts. It has been introduced to Norway.

At altitudes where stands of snow gum coincide with seasonal snowfall above an altitude of about 1,500 m (4,900 ft), the trees have been shown to increase snowpack accumulation and moderate melt, making snow gum critically important to the hydrology and water resources of southeast Australia. Bushfire impact on snow gums alters these effects and leads to reduced snowpack longevity and greater evaporation/sublimation processes, in turn reducing snowpack runoff available for ecosystem and human use. It is estimated that the 2019-2020 bushfires impacted 462 km2 (33%) of mapped snow gum forest that regularly has seasonal snowpack, which would equate to a reduction in annual snowpack runoff of 25.6 gigalitres (about 10,240 olympic swimming pools).

All content from Kiddle encyclopedia articles (including the article images and facts) can be freely used under Attribution-ShareAlike license, unless stated otherwise. Cite this article:
Eucalyptus pauciflora Facts for Kids. Kiddle Encyclopedia.