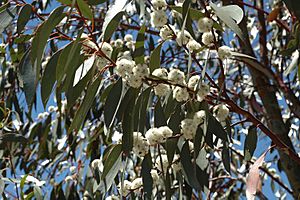 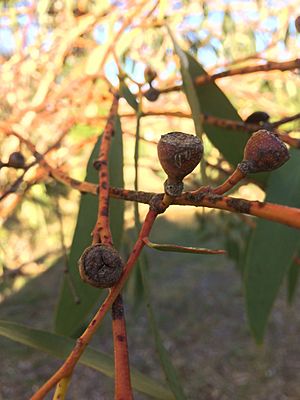 Eucalyptus pauciflora subsp. pauciflora, commonly known as snow gum, cabbage gum or white sally is a tree or mallee that is endemic to eastern Australia. It has smooth bark, glossy green, lance-shaped, curved or elliptical leaves, flower buds in groups of between nine and fifteen, white flowers and cup-shaped, hemispherical or conical fruit.

Eucalyptus pauciflora was first formally described in 1827 by Kurt Polycarp Joachim Sprengel from an unpublished description by Franz Sieber and Sprengel's description was published in Systema Vegetabilium. When Lawrie Johnson and Donald Blaxell published subspecies debeuzevillei and niphophila, subspecies pauciflora became the autonym.

Subspecies pauciflora is the most widespread subspecies of Eucalyptus pauciflora and is found from near Stanthorpe in the far south east of Queensland, through New South Wales, Victoria and Tasmania to Mount Gambier in the south east of South Australia. It also occurs from coastal areas such as the Mornington Peninsula to all but the highest altitudes in the Australian Alps. It grows in woodland and forest, often in pure stands, but often also with other eucalypt species.

All content from Kiddle encyclopedia articles (including the article images and facts) can be freely used under Attribution-ShareAlike license, unless stated otherwise. Cite this article:
Eucalyptus pauciflora subsp. pauciflora Facts for Kids. Kiddle Encyclopedia.