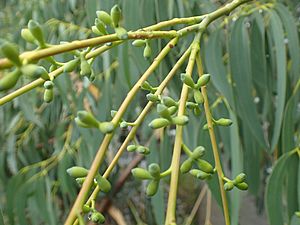 Eucalyptus perriniana, commonly known as spinning gum, is a tree or mallee which is native to New South Wales, the Australian Capital Territory, Victoria and Tasmania. Spinning gum is a sub-alpine species and grows in areas which are normally snow covered for several months in winter. However domestic cultivars can grow in almost any temperate climate.

Eucalyptus perriniana was first formally described in 1894 by Leonard Rodway from an unpublished description by Ferdinand von Mueller. Rodway's description was published in Papers and Proceedings of the Royal Society of Tasmania. Rodway did not give a reason for the specific epithet (perriniana) but George Samuel Perrin was Conservator of Forests in Tasmania in 1886 and 1887 before being appointed Conservator of Forest in Victoria in 1888.

This eucalypt is listed as "rare" under the Tasmanian Government Threatened Species Protection Act 1995. Only about one thousand individual plants are known from that state.

Catechin-7-O-glucoside and catechin-5-O-glucoside can be produced by biotransformation of (+)-catechin by cultured cells of E. perriniana.

All content from Kiddle encyclopedia articles (including the article images and facts) can be freely used under Attribution-ShareAlike license, unless stated otherwise. Cite this article:
Eucalyptus perriniana Facts for Kids. Kiddle Encyclopedia.