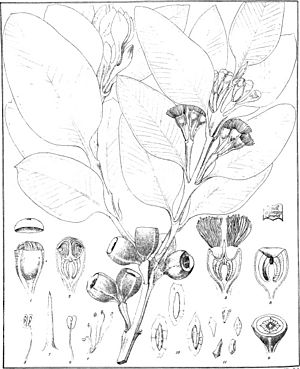 Eucalyptus pleurocarpa from "Eucalyptographia. A descriptive atlas of the eucalypts of Australia and the adjoining islands" (1879) 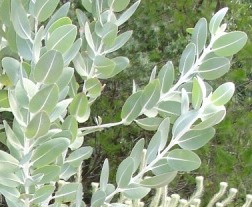 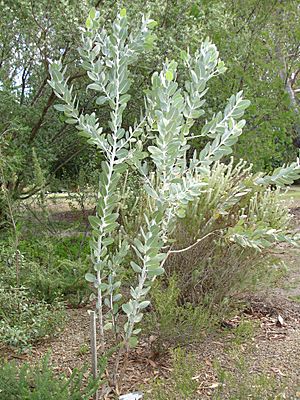 Eucalyptus pleurocarpa, commonly known as tallerack, talyerock or tallerack is a species of mallee that is endemic to the southwest of Western Australia. It has smooth bark, broadly lance-shaped to elliptical, grey or glaucous leaves that are arranged more or less in opposite pairs, flower buds in groups of seven, whitish flowers and glaucous, barrel-shaped fruit. It is easily recognised in the field by its form, large, white, waxy leaves and, when in flower, its stamens clustered in four groups.

Eucalyptus pleurocarpa was first formally described in 1844 by Johannes Conrad Schauer in Lehmann's book, Plantae Preissianae from specimens collected near Cape Riche. In 1867 George Bentham mentioned it as a synonym of Eucalyptus × tetragona, previously described by Ferdinand von Mueller, based on Robert Brown's Eudesmia tetragona. Eucalyptus pleurocarpa has been regarded as a synonym of E. tetragona including in the Flora of Australia in 1988. The specific epithet (pleurocarpa) is from ancient Greek meaning "a rib" and "-fruited".

The Noongar names for the species are talyerock or tallerack.

The species name for the plant pleurocarpa is from the Greek words pleura meaning rib and carpos meaning fruit - because of the ribbed fruits.

The species belongs to the sub-genus Eudesmia which all have the stamens in four bundles each at the corner of the square-shaped flower. The sub-group also includes E. erythrocorys

Eucalyptus pleurocarpa is found at two different locations on the undulating sandplains of south-western Western Australia from Eneabba in the Wheatbelt region in the north and between Albany and Esperance in the Great Southern and Goldfields-Esperance regions to the south.

Like most mallees, the species is well suited to arid and semi-arid environments.

The plant is sold commercially as an ornamental plant and the flowers and foliage are used as cut flowers. It is drought tolerant but is susceptible to frost and can grow in a range of soils in a full sun position.

All content from Kiddle encyclopedia articles (including the article images and facts) can be freely used under Attribution-ShareAlike license, unless stated otherwise. Cite this article:
Eucalyptus pleurocarpa Facts for Kids. Kiddle Encyclopedia.