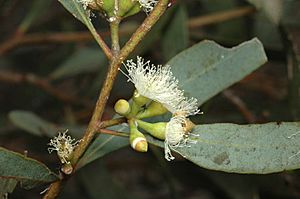 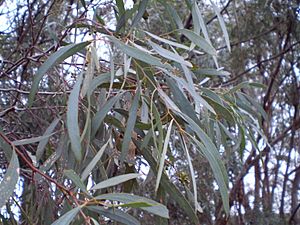 Eucalyptus polybractea, commonly known as the blue-leaved mallee or simply blue mallee, is a species of mallee that is endemic to south-eastern Australia. It has rough, fibrous or flaky bark on the lower part of the trunk, smooth greyish or brownish bark above, lance-shaped adult leaves, flower buds in groups of between seven and eleven, white flowers and cup-shaped or barrel-shaped fruit.

Eucalyptus polybractea was first formally described in 1901 by Richard Thomas Baker in Proceedings of the Linnean Society of New South Wales from specimens collected near West Wyalong by Richard Hind Cambage. The specific epithet (polybractea) is from the ancient Greek poly- and the Latin bractea, referring to the many bracts of this species, although many eucalytps have "many bracts" at the base of immature flowers.

In 2018, Kevin James Rule described two subspecies, polybractea and suberea but the names have not been accepted by the Australian Plant Census.

Blue-leaved mallee has a wide, but sporadic distribution around West Wyalong in New South Wales and between Stawell and Bendigo in Victoria. In grows in mallee shrubland on loamy soils.

Eucalyptus polybractea leaves are used to produce eucalyptus oil with very high levels of cineole (up to 91%), yielding 0.7-5% fresh weight overall. The oil is primarily used medicinally and for flavoring.

This eucalypt is the most commonly planted tree in Australia as part of carbon offset programs. Primarily, this is because the blue-leaved mallee is native to Australia, can grow effectively in drought conditions and can store a great deal of carbon quickly.

All content from Kiddle encyclopedia articles (including the article images and facts) can be freely used under Attribution-ShareAlike license, unless stated otherwise. Cite this article:
Eucalyptus polybractea Facts for Kids. Kiddle Encyclopedia.