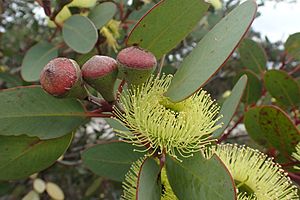 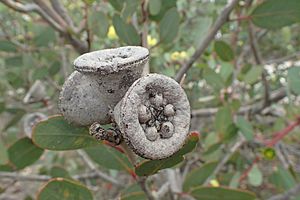 Eucalyptus preissiana, commonly known as bell-fruited mallee, is a species of small tree or shrub that occurs in an area between Albany and Esperance in Western Australia. It has a spreading habit, smooth bark, elliptical to egg-shaped or oblong leaves, flower buds in groups of three, yellow flowers and cup-shaped, conical or bell-shaped fruit.

Eucalyptus preissiana was first formally described in 1844 by the Johannes Conrad Schauer and the description was published in Lehmann's book Plantae Preissianae. The specific epithet honours Ludwig Preiss who collected the type specimen near Cape Riche in 1840.

In 1995 Ian Brooker and Andrew Slee described two subspecies and the names have been accepted by the Australian Plant Census:

Bell-fruited mallee can be cultivated in temperate areas of Australia but performs poorly in tropical environments. It is propagated from seeds and germinates easily. It prefers a position in full sun and in well-drained soils.

All content from Kiddle encyclopedia articles (including the article images and facts) can be freely used under Attribution-ShareAlike license, unless stated otherwise. Cite this article:
Eucalyptus preissiana Facts for Kids. Kiddle Encyclopedia.