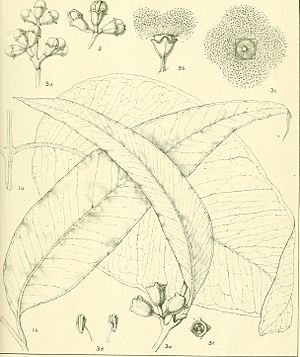 Illustration from Maiden's A Critical Revision of the Genus Eucalyptus

Eucalyptus tetrodonta, commonly known as Darwin stringybark or messmate, is a species of medium-sized to tall tree that is endemic to northern Australia. It has rough, stringy or fibrous bark on the trunk and branches, lance-shaped leaves arranged in opposite pairs, flowers buds in groups of three, whitish to cream-coloured flowers and cylindrical fruit.

Eucalyptus tetrodonta was first formally described by the botanist Ferdinand von Mueller in 1859 in Journal of the Proceedings of the Linnean Society, Botany. The specific epithet is derived from the ancient Greek words meaning "four" and "a tooth", in reference to the four teeth sometimes found around the rim of the fruit. The closest relative of this tree is E. megasepala.

The Darwin stringybark is found on flats and plateaus in the Kimberley region of Western Australia region where it grows on flat areas and plateaus in sandy soils over laterite, sandstone or quartzite. The range extends eastward across the top end of the Northern Territory and parts of the Gulf of Carpentaria and Cape York regions in North Queensland. It is usually a part of open forest or woodland communities.

All content from Kiddle encyclopedia articles (including the article images and facts) can be freely used under Attribution-ShareAlike license, unless stated otherwise. Cite this article:
Eucalyptus tetrodonta Facts for Kids. Kiddle Encyclopedia.