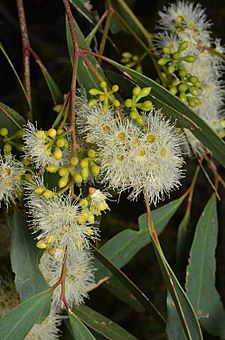 Eucalyptus woollsiana is a species of tree that is endemic to eastern Australia. It has rough, fibrous bark on the trunk, smooth bark above, lance-shaped adult leaves, flower buds in groups of five or seven, white flowers and cup-shaped fruit.

Eucalyptus woollsiana was first formally described in 1901 by Richard Thomas Baker in Proceedings of the Linnean Society of New South Wales.

This eucalypt grows on flat land, often with brigalow (Acacia harpophylla) and belah (Casuarina cristata) on heavy clay soils. It is widespread in inland Queensland south from Injune to the western slopes and plains of New South Wales. It intergrades with E. microcarpa at the southern end of its range.

This species is classified as "least concern" under the Queensland Government Nature Conservation Act 1992.

All content from Kiddle encyclopedia articles (including the article images and facts) can be freely used under Attribution-ShareAlike license, unless stated otherwise. Cite this article:
Eucalyptus woollsiana Facts for Kids. Kiddle Encyclopedia.