Euphydryas gillettii, or Gillette's checkerspot, is a species of butterfly, common in western North America from British Columbia to Oregon and from the Rocky Mountains to the Pacific Ocean. The wingspan is 36–45 mm (1.4–1.8 in). The species was first described by William Barnes in 1897.

Adults fly from mid-June to early August in Alberta. 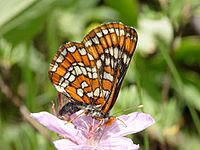 All content from Kiddle encyclopedia articles (including the article images and facts) can be freely used under Attribution-ShareAlike license, unless stated otherwise. Cite this article:
Euphydryas gillettii Facts for Kids. Kiddle Encyclopedia.