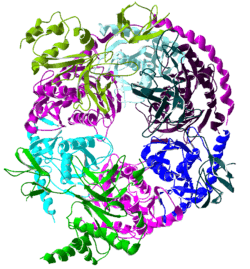 "Ribbon view" of the human exosome complex. PDB 2NN6. The channel through which RNA passes during degradation is visible at the center of the protein complex

The core of the complex has a ring structure consisting of six proteins that all belong to the same class of RNases, the 'RNase PH-like proteins'.

Exosome complexes are found in both eukaryotic cells and archaea. In bacteria a simpler complex called the degradosome carries out similar functions.

All content from Kiddle encyclopedia articles (including the article images and facts) can be freely used under Attribution-ShareAlike license, unless stated otherwise. Cite this article:
Exosome complex Facts for Kids. Kiddle Encyclopedia.