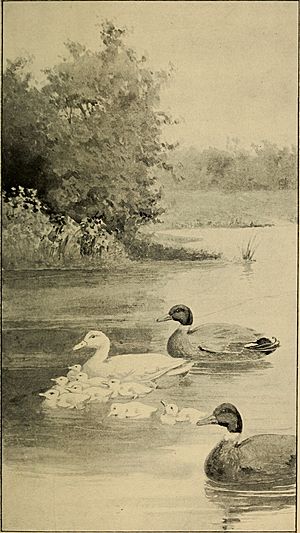 Illustration by F.C. Gordon for Clara D. Pierson's Among the Farmyard People (1899)

Frederick Charles Gordon was born in Cobourg, Ontario in 1856, and received his early artistic training in Paris, France, at the Académie Julian and the Académie Colarossi. On his return to Canada, he moved to Brockville and taught art at the Brockville Business College for a time.

In 1886, Gordon moved to New York City for further art training at the Art Students League. He became a staff artist for Century magazine and created some covers for The Outlook magazine. He also illustrated books by authors such as Clara D. Pierson, Ian Maclaren, Nathaniel Hawthorne, and Ruth Ogden.

All content from Kiddle encyclopedia articles (including the article images and facts) can be freely used under Attribution-ShareAlike license, unless stated otherwise. Cite this article:
F. C. Gordon Facts for Kids. Kiddle Encyclopedia.