Cobourg is a town in the Canadian province of Ontario, located in Southern Ontario 95 km (59 mi) east of Toronto and 62 km (39 mi) east of Oshawa. It is the largest town in and seat of Northumberland County. Its nearest neighbour is Port Hope, 7 km (4 mi) to the west. It is located along Highway 401 (exits 472 and 474) and the former Highway 2 (now Northumberland County Road 2). To the south, Cobourg borders Lake Ontario. To the north, east and west, it is surrounded by Hamilton Township.

The settlements that make up today's Cobourg were founded by United Empire Loyalists in 1798. Some of the founding fathers and early settlers were Eluid Nickerson, Joseph Ash, Zacheus Burnham and Asa Burnham. The Town was originally a group of smaller villages such as Amherst and Hardscrabble, which were later named Hamilton. In 1808 it became the district town for the Newcastle District. It was renamed Cobourg in 1818, in recognition of the marriage of Princess Charlotte Augusta of Wales to Prince Leopold of Saxe-Coburg-Saalfeld (later Saxe-Coburg and Gotha, who would later become King of Belgium).

By the 1830s Cobourg had become a regional centre, much due to its fine harbour on Lake Ontario. In 1835 the Upper Canada Academy was established in Cobourg by Egerton Ryerson and the Wesleyan Conference of Bishops. On July 1, 1837, Cobourg was officially incorporated as a town. In 1841 the Upper Canada Academy's name was changed to Victoria College. In 1842 Victoria College was granted powers to confer degrees. Victoria College remained in Cobourg until 1892, when it was moved to Toronto and federated with the University of Toronto. In 1842, John Strachan founded the Diocesan Theological Institute in Cobourg, an Anglican seminary that became integrated into the University of Trinity College in Toronto in 1852.

Standing at the heart of the downtown is Victoria Hall, a building that now serves as the town hall, as well as home of the Art Gallery of Northumberland, the Cobourg Concert Hall, and an Old Bailey-style courtroom that is now used as the Council chamber. Victoria Hall was designed by architect Kivas Tully. The landmark is known for its impressive stone work. Charles Thomas Thomas (1820-1867), an English-born master stonecarver and building contractor, executed the fine stone carvings, including the bearded faced keystone over the main entrance into the building. Victoria Hall was officially opened in 1860 by the Prince of Wales, later to become Edward VII of the United Kingdom, King Edward VII. At that time, Cobourg was a significant town in the Province of Canada, and some townspeople felt that Cobourg would be a suitable capital for the newly united provinces; this privilege went to Ottawa, Ontario, however.

In the late 19th century and early 20th century, wealthy Americans built enormous summer homes there, a few of which still stand today. One notable home, on King Street East, became the Brookside School - now a youth detention centre. A major ferry service connected Cobourg and Rochester, New York from 1907 to 1952, transporting passengers and cargo across Lake Ontario, allowing Americans to reach the town more readily. The Cobourg and Peterborough Railway ran northward over Rice Lake to Peterborough, but the lines collapsed into Rice Lake in the late 1800s. After World War II and the advent of improved transportation technology, this economic link decreased in importance.

Cobourg was the site of No. 26 Ordnance Depot, later Canadian Forces Station Cobourg, from 1953 to 1971.

Throughout the late 1980s and early 1990s, the town invested heavily in purchasing property along the waterfront and beautifying the area. A boardwalk was developed to connect the harbour and large sandy beach while further pathways were created to encompass Victoria Park and the historic downtown. Because of this renewal and revitalization, many community activities now revolve in and around these spaces.

The Ontario Waterfront Trail passes through Cobourg and cyclists can be found moving through daily during the warmer months. 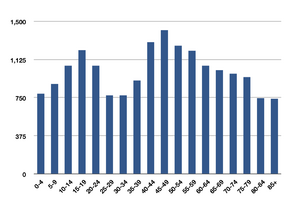 Age distribution in Cobourg according to the 2006 census.

Cobourg retains its small-town atmosphere, in part due to the downtown and surrounding residential area's status as a Heritage Conservation District. The downtown is a well-preserved example of a traditional small-town main street. Victoria Hall, the town hall completed in 1860, is a National Historic Site of Canada. The oldest building in the town is now open as the Sifton Cook Heritage Centre and operated by the Cobourg Museum Foundation. 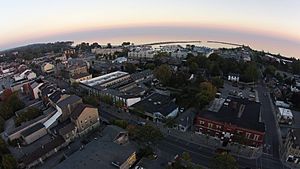 Cobourg has a multitude of beautiful, well-maintained parks. The Cobourg Waterfront Festival, held in Victoria Park and the nearby beach and harbour, is an annual arts and crafts event occurring on Canada Day. It began in 1987 as a part of the town's sesquicentennial celebrations, and was conceived by the Art Gallery of Northumberland's former Director/Curator Peter Tulumello and former Concert Hall Manager Mark Finnan. Cobourg's oldest annual event the Cobourg Highland Games was started in 1963 in Donegan Park by Dave Carr to celebrate the Scottish culture in this area. In 2013 for its 50th Anniversary it will be moved to Victoria Park and will be held on the 3rd Saturday in June.

Cobourg's beach, Victoria Park Beach, is very popular among residents and tourists of Cobourg. Host to volleyball tournaments, events, beach days, family picnics and more. The beach is equipped with a splash park, playground set, park area for eating, local restaurants and a pier. There are lifeguards on duty some days and it is safe to swim and play in. Close to the downtown, tourists can shop in local shops and eat out at many of Cobourg's fine dining restaurants.

Cobourg also has a satellite campus of Fleming College.

In 1871 Cobourg’s first Collegiate Institute was erected on King Street East. In 1899 the student population at the original Cobourg Collegiate Institute had outgrown the school. New plans for another school on the west end of king street were put in place and the new school building on 135 king street was erected. This new building was called the West high school and the older school building was then named the East high school. The West high school had many additions in the 1920’s as the school continued to grow. The two schools co-existed for 116 years until the closing of both schools in 2015. The purpose of closing the two schools was to bring them back together with the fabrication of a brand new Cobourg Collegiate Institute in 2015. The new school was built on the property of the old east high school. The old west high school was not demolished, but renamed William Academy Cobourg West and is a functioning co-ed private school for grades 7-12.

All content from Kiddle encyclopedia articles (including the article images and facts) can be freely used under Attribution-ShareAlike license, unless stated otherwise. Cite this article:
Cobourg Facts for Kids. Kiddle Encyclopedia.