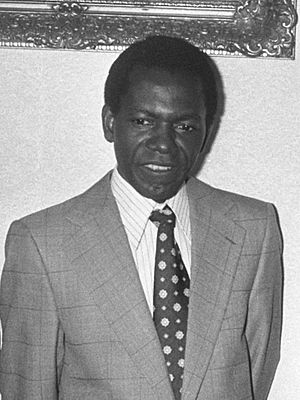 Fabien Eboussi Boulaga (17 January 1934 – 13 October 2018) was a Cameroonian philosopher. He was born in Bafia, Cameroon. He was ordained as a priest in 1969, and became an official member of the Society of Jesus in 1973. He became known for his book Bantou problématique (1968). Boulaga was a professor at the University of Yaoundé.

All content from Kiddle encyclopedia articles (including the article images and facts) can be freely used under Attribution-ShareAlike license, unless stated otherwise. Cite this article:
Fabien Eboussi Boulaga Facts for Kids. Kiddle Encyclopedia.