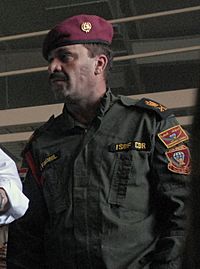 Fadhil Jamil al-Barwari (1966 – 20 September 2018) was an Iraqi military commander. He was the head of the Iraqi Counter Terrorism Bureau. He was born in Dohuk, Iraq. He joined the Iraqi Army in 2004 after the invasion. He quickly rose through the ranks of the military ladder, becoming the commanding officer of the Iraqi Special Operations Forces (ISOF).

All content from Kiddle encyclopedia articles (including the article images and facts) can be freely used under Attribution-ShareAlike license, unless stated otherwise. Cite this article:
Fadhil Jalil al-Barwari Facts for Kids. Kiddle Encyclopedia.