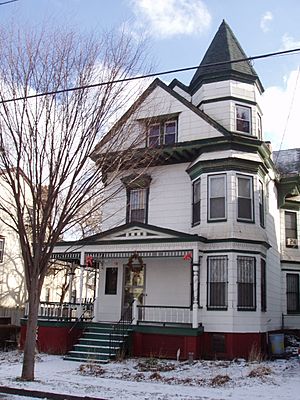 A well-maintained Victorian House in Fairmount

Fairmount is an unincorporated community and neighborhood within the city of Newark in Essex County, New Jersey, United States. It is part of the West Ward. Its population is mostly African American, of varying economic statuses. Central Avenue is the major street, though its commerce is considerably reduced from the Industrial Era heyday. The neighborhood is officially bounded by South Orange Avenue on the south, the Garden State Parkway on the west, Interstate 280 on the north, and the University of Medicine and Dentistry of New Jersey on the east.

All content from Kiddle encyclopedia articles (including the article images and facts) can be freely used under Attribution-ShareAlike license, unless stated otherwise. Cite this article:
Fairmount, Newark, New Jersey Facts for Kids. Kiddle Encyclopedia.