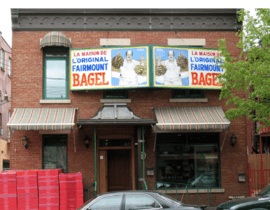 Fairmount Bagel is a Montreal-style bagel bakery in Montreal, Quebec, Canada in the Mile End neighbourhood of the Plateau-Mont-Royal borough. The first location opened on September 7, 1919 on Saint-Laurent Boulevard by Isadore Shlafman. The current location, on 74 Fairmount Avenue West was opened in 1949. Fairmount Bagel still remains a family-run business.

Fairmount Bagel was the first bagel bakery of its kind in Montreal. Isadore Shlafman, known as Grandfather Isadore, moved from Russia to Canada, and opened the bakery in 1919 – originally called the Montreal Bagel Bakery, located on Saint-Laurent Boulevard. In 1949, Grandfather Isadore moved from the Saint-Laurent location to a cottage on Fairmount Avenue. The location of the bakery was moved to the first floor of their home, and the family lives upstairs. The Shlafman family changed the name, in accompaniment to the new location, to “The Original Fairmount Bagel Bakery”. Since the opening, Fairmount Bagel has remained a family-run business. Grandfather Isadore passed the business down to his son Jack Shlafman, who then passed it to his son, Irwin Shlafman. The same methods are used to make the bagels – rolled by hand and baked in an old-fashioned wood-burning oven.

Origins of the Montreal bagel

Jewish immigrants from Eastern Europe, specifically Poland, introduced the Montreal bagel to North America. Originally, the “beugel” was a traditional gift, first, to the King of Poland, John III Sobieski, then more commonly to new mothers. From here, the bagel ended up being sold in the city streets of Russia and was called "bublik". In the first half of the 20th century, after being brought to North America, these bagels were almost exclusively made and sold within the Montreal Jewish communities. In the 1970s, the Montreal bagel gained popularity on the other side of the Canadian border and were mass-produced to supply this demand. Some people compare the characteristics of the Montreal bagel, compared to other bagels, as being reflective of the hostility toward the immigrating Jewish population in the 20th century. Much like those Jews had to develop thick skin and form tight-knit communities, the Montreal bagel more compact and chewier than other bagels.

According to mtl.org, the proper way to eat Fairmount Bagels is fresh out of the bag, with “schmear”, such as cream cheese.

Fairmount Bagel has been located on Fairmount street since 1949. The painting “Fairmount Bagel In Winter” by Carole Spandau was chosen to represent the Plateau Mont-Royal in the Fall 2013 exhibit at the Pointe-à-Callière Museum in Montreal. Many artists have used the iconic storefront as a source of inspiration. These artworks can be found on the Fairmount Bagel website. 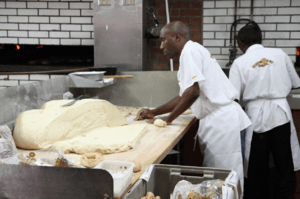 Inside the Bakery's Production Process

Montreal-style bagels are smaller, less chewy, and sweeter than the New-York style bagel. The former is also made with honey and malt syrup. The process of making this baked good consists of hand-rolling and then submerging the bagel dough in boiling water for roughly 3 minutes, then baking it in a wood-fired oven for 20 minutes.

At Fairmount, sesame bagels make up 70 percent of their sales. Nonetheless, the company has a range of fresh products. The store sells several “schmears”, such as tubs of cream cheese, for customers to apply to their bagels. 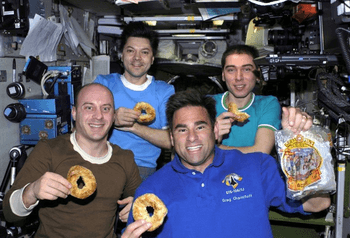 Greg Chamitoff and colleagues with Fairmount Bagels In Outer Space

In May 2008, the first bagel made it to outer space from the International Space Station on mission STS-124. 45-year old Astronaut Greg Chamitoff, the nephew of the owner of the store, managed to take products from Fairmount Bakery with him in his shuttle into space.

Montreal bagels and the environment

As environmental concerns are increasing, Montreal-style bagels are becoming increasingly rare. Wood-burning ovens, which contribute to the character of the Montreal bagel, might be forced out of existence. Although gas ovens could be used, it will be a monumental change in the tradition of the art form of the Montreal bagel. While they are safe for now, time will only tell how much the city values the century-old tradition.

The Fairmount bagel is slightly sweeter than St-Viateurs. Montreal food blogger Katerine Rollet says that when you ask people which they prefer, it's about a 60-40 split, Fairmount to St-Viateur. Given the two bageleries close proximity, convenience is not a deciding factor when picking where to buy their products—it's about loyalties.

Adam Gopnik wrote in the New Yorker that a true bagel is a wood-fired Montreal one from either store.

There have been tours created to showcase the different vendors and to fuel the debate about which is superior.

"Bagels in the Blood", documentary about Fairmount Bagel

Filmmakers Jonathan Keijser, from Halifax, and Daniel Beresh, from Edmonton, spent time in Montreal, created a documentary about Fairmount Bagel after spending time in Montreal while pursuing musical-theatre projects. “Bagels in the Blood” is dedicated to sharing their interests, as well as helping people learn more about Fairmount Bagel culture. The documentary can be found on Vimeo.

All content from Kiddle encyclopedia articles (including the article images and facts) can be freely used under Attribution-ShareAlike license, unless stated otherwise. Cite this article:
Fairmount Bagel Facts for Kids. Kiddle Encyclopedia.