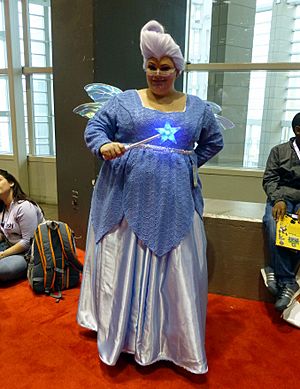 A cosplayer dressed up as the Fairy Godmother.

The Fairy Godmother is the main antagonist of the 2004 animated feature movie Shrek 2. She is voiced by Jennifer Saunders. She does not appear in William Steig's original picture book.

The Fairy Godmother was picked by King Harold and Queen Lillian to lock away Princess Fiona to the Dragon's Keep until Shrek rescued her. By the time they got married, they visited Far Far Away. After a rough dinner, she was summoned by Fiona for a happy night. She gave Shrek a business card for her potion factory.

All content from Kiddle encyclopedia articles (including the article images and facts) can be freely used under Attribution-ShareAlike license, unless stated otherwise. Cite this article:
Fairy Godmother (Shrek) Facts for Kids. Kiddle Encyclopedia.