Fall Creek is an unincorporated community in Lane County, Oregon, United States, southeast of Eugene/Springfield. Nearby communities include Dexter to the south, Lowell to the southeast, and Jasper to the northwest.

The locale was named for Fall Creek, a stream originating in Willamette National Forest and flowing into the Middle Fork Willamette River just below the community. Fall Creek Lake lies upstream on Fall Creek. There is no reservoir on Little Fall Creek. 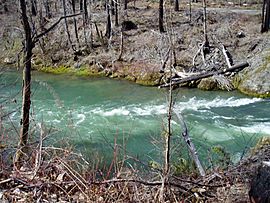 All content from Kiddle encyclopedia articles (including the article images and facts) can be freely used under Attribution-ShareAlike license, unless stated otherwise. Cite this article:
Fall Creek, Oregon Facts for Kids. Kiddle Encyclopedia.