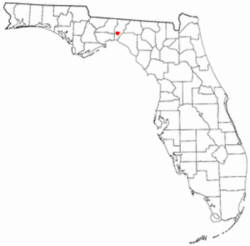 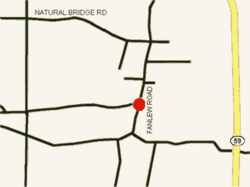 Fanlew is located west of State Road 59 at Fanlew Road, and at the east end of Natural Bridge Rd., which comes out of neighboring Leon County.

Fanlew began as a railway distribution center of the Florida Central Railroad and later the Atlantic Coast Line Railroad. The community served the sawmills and turpentine stills once in the area, with supplies moving in and timber and naval stores moving out. "Fanlew" is a combination of the names of John Lewis Philips, the founder of the Florida Central Railroad, and his wife Fannie.

All content from Kiddle encyclopedia articles (including the article images and facts) can be freely used under Attribution-ShareAlike license, unless stated otherwise. Cite this article:
Fanlew, Florida Facts for Kids. Kiddle Encyclopedia.