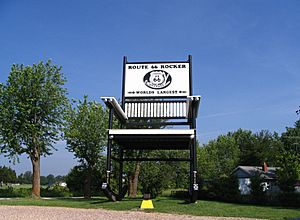 A post office called Fanning was established in 1887, and remained in operation until 1953. Fanning is named for John Fanning (1821-1906), originally of Limerick, Ireland. John Fanning was the founding railway section foreman beginning in the mid-19th century when the St. Louis-San Francisco Railway (Frisco) was first built through the region. His home, which still stands in Fanning, was for many decades the railway station, church, post office, and social center of the community.

All content from Kiddle encyclopedia articles (including the article images and facts) can be freely used under Attribution-ShareAlike license, unless stated otherwise. Cite this article:
Fanning, Missouri Facts for Kids. Kiddle Encyclopedia.