On top of the mount is a folly, which stands as a monument to a horse named 'Beware Chalk Pit', which carried its owner to a racing victory in 1734, a year after falling into a twenty-five feet deep chalk pit while out hunting. 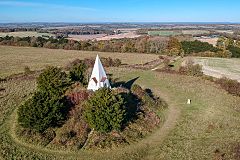 There are plaques on the interior and exterior of the monument, which read:

Underneath lies buried a horse, the property of Paulet St. John Esq., that in the month of September 1733 leaped into a chalk pit twenty-five feet deep afoxhuntiing with his master on his back and in October 1734 he won the Hunters Plate on Worthy Downs and was rode by his owner and was entered in the name of "Beware Chalk Pit".

The folk band Contraband recorded "Beware Chalk Pit" by Graham Penny, featuring the words: There's a tale I'll tell to you, tis remarkable but true, of Sir Paulet St. John and his noble steed, an event as you shall see, back in seventeen thirty three, of which Hampshire gentlemen should all take heed. CHORUS: Beware Chalk Pit, Beware Chalk Pit, as you go galloping o'er the downs, Beware Chalk Pit.

All content from Kiddle encyclopedia articles (including the article images and facts) can be freely used under Attribution-ShareAlike license, unless stated otherwise. Cite this article:
Farley Mount Facts for Kids. Kiddle Encyclopedia.