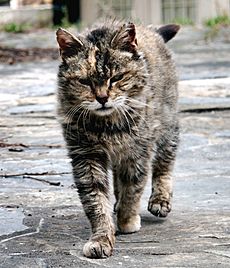 The farm cat, also known as a barn cat, is a domestic cat, usually of mixed breed, that lives primarily out-of-doors, in a feral or semi-feral condition on agricultural properties, usually sheltering in outbuildings. They eat assorted vermin such as rodents and other small animals that live in or around outbuildings and farm fields. The need for the farm cat may have been the original reason cats were domesticated, to keep rodents from consuming or contaminating grain crops stored for later human consumption. They are still commonly kept for their effectiveness at controlling undesired vermin found on farms and ranches, which would otherwise eat or contaminate crops, especially grain or feed stocks. Farm cats hunt the initial rodent population, and pheromones keep further rodents from filling the void.

Archeological evidence suggests that the earliest domestication of cats occurred about 7500 BC and was motivated by the human need to safeguard grain stores from rodent pests.

Farm cats live in a variety of conditions. Some are feral with minimal human contact, no veterinary care, and derive sustenance solely from their job of lowering the mouse and rat populations. Lack of a guaranteed food supply, internal parasites, and greater physical exertion tends to make these cats thinner than their house cat counterparts, with a shorter lifespan. Others are kept as part-time pets, living both indoors and out, roaming freely, yet allowed inside to be fed supplemental cat food on a regular basis, and given routine veterinary care. Yet others live outdoors or in outbuildings full-time in semi-feral conditions, but are still tamed to be friendly toward humans and may be given basic veterinary care. All are subject to some risks inherent to outdoor life. Their prey may transmit parasites and disease, they may be injured by various means, and they can be struck by vehicles. Predation is also possible: cats are eaten by raccoons, owls, coyotes, and other animals that prey on creatures of their size. 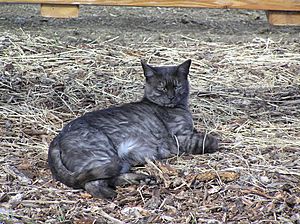 Some full-time outdoor populations are given supplemental cat food by property owners, either to encourage them to stay or due to humane motivations of not wanting thin, hungry, or sick animals on the property. Other property owners deliberately do not feed outside farm cats in the incorrect belief that they will not hunt rodents if they have supplemental food. Without supplementary food, cats will exterminate much of the local rodent population and move on, leaving only a temporary void. However, one concern with providing supplemental outdoor feed is that it can attract skunks, raccoons and other vermin.

Farm cats originate from a variety of sources. Sometimes, farm cat populations are spontaneously established when abandoned or stray animals, uninvited by humans, move into areas where prey is available, such as haystacks or farm outbuildings that contain stored crops or livestock fodder. In other cases, property owners obtain and release a few cats specifically for rodent control. Some animal shelters have Working Cat programs that re-home sterilized feral and semi-feral cats at barns, warehouses, stores, and more. These programs have been growing in popularity in cities like Chicago, where rat problems are common.

If a population of feral adult female farm cats is high enough, a farm cat population can be self-sustaining. The females establish permanent homes in barns or other structures and raise repeated litters. Males may stay around if food is plentiful, though they tend to roam over a wider territory. Farm cat colonies can be subject to inbreeding, as a closed population may mate with one another's siblings, parents, or offspring. Spaying and neutering prevent unwanted litters, overpopulation, and inbreeding. In some cases, feral animals are trapped, spayed or neutered, then re-released to keep their territory claimed and to prevent new, fertile strays from taking up residence.

If given supplemental food or where rodents are plentiful, losses from predation or disease may be made up by new stray animals moving into territory. If given no supplemental food, particularly in areas with high numbers of predators, farm cat populations may occasionally become extirpated if there are few nearby strays and a low breeding population. Predators, accidents, disease, parasites and hunger will all take a toll. More often, especially when supplemental food is provided, overpopulation is common, and losses then occur primarily due to disease or accidents, with predation playing a minor role—all insufficient to make a substantial dent in the population. Where numbers become an issue, some farm cat populations are controlled by shooting, poisoning, or trapping excess numbers. Sometimes, excess numbers are given to animal shelters, but if the animals are feral, their chances of adoption are low.

All content from Kiddle encyclopedia articles (including the article images and facts) can be freely used under Attribution-ShareAlike license, unless stated otherwise. Cite this article:
Farm cat Facts for Kids. Kiddle Encyclopedia.