Farnham is an unincorporated community in Richmond County, in the U.S. state of Virginia. 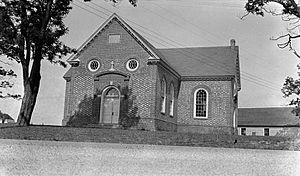 Farnham takes its name from Farnham, in Surrey, England.

The North Farnham Church was built in 1737 and has featured in historic events since then. Two years into the War of 1812, bullet holes were left in the walls during a conflict between the Virginia militia and the British fleet, led by Admiral George Cockburn. This event was called the Skirmish at Farnham Church. During the Civil War the church was used by Union soldiers as a stable. It has been restored several times, once in 1872 and again in 1924.

Linden Farm, also known as Dew House, is an early 18th-century farm situated on 282 acres. It has been on the National Register of Historic Places since 1977.

All content from Kiddle encyclopedia articles (including the article images and facts) can be freely used under Attribution-ShareAlike license, unless stated otherwise. Cite this article:
Farnham, Virginia Facts for Kids. Kiddle Encyclopedia.